Heroes are one of the most important parts in this game, and how to grow your hero is also a daily routine to players, a good hero match can help you a lot in battles when fighting with players with similar powers. My kingdom 213 has been opened for 4 months, and I’ve tried many hero matches, though made some mistakes, Now I want to share my experience in hero enhancing with new players, hope it would be helpful to for new players to understand this game. The article mainly divided into 3 parts, how to match heroes; how to enhance heroes and some experiences in collecting hero exp.Heroes match.

A brief introduction of heroes.This introduction mainly compares the usefulness of heroes and the difficulty of obtaining them. In addition, B-level heroes are not introduced because they are extremely easy to obtain and not very useful.

Archer Heroes.Archer heroes include S Alexander, A Eric, A Eleanor, and A Edward. Among them, S Alexander is easy to obtain and is the only S-rank hero that can be exchanged with common Spirits. It is an essential hero in the match and needs to be enhanced. Since the main output of the archer troops in the later period is the archer, and Eric's ult can only take effect on the crossbowmen, it is not worth enhancing him for a long time. Eleanor's ult can be effective against both crossbowmen and archers. Edward's ult has a chance to hit the adjacent square, which can be chosen according to personal preference. But according to my observation, the vast majority of players in the game choose Eleanor. 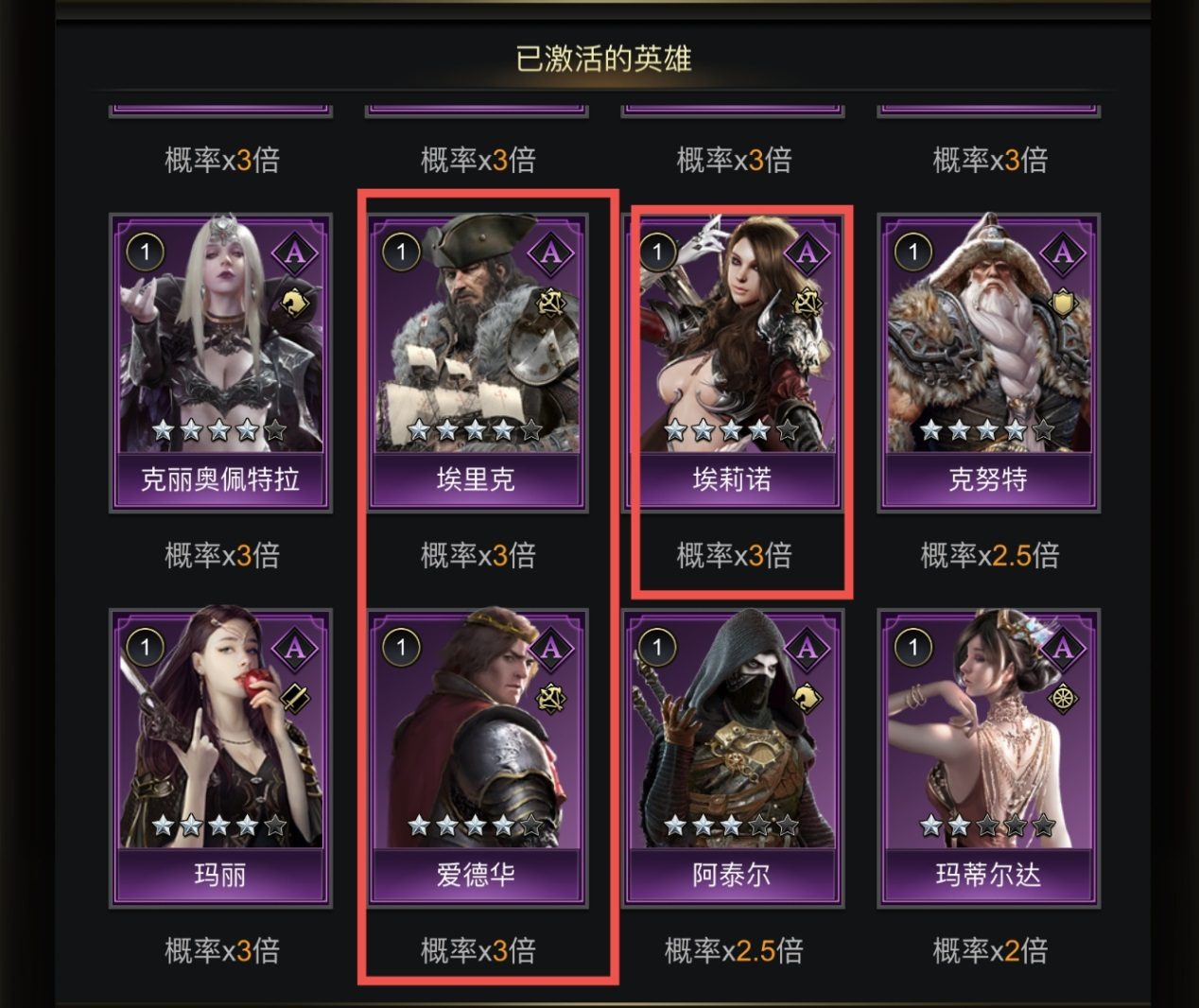 Cavalry Heroes.Cavalry heroes include S Genghis Khan, A Diodora, A Cleopatra, A Altai. The difficulty of obtaining is A Altai> A Diodora = A Cleopatra. S Genghis Khan as a S hero is easy to get compares to Cesar and Joan. For A heroes, since the main output of cavalry in the later stage is heavy cavalry, Cleopatra is excluded from long-term play. The difficulty of obtaining Altai is the same as Knut. If players with few gold coins are playing cavalry, it is recommended to use Diodora directly. 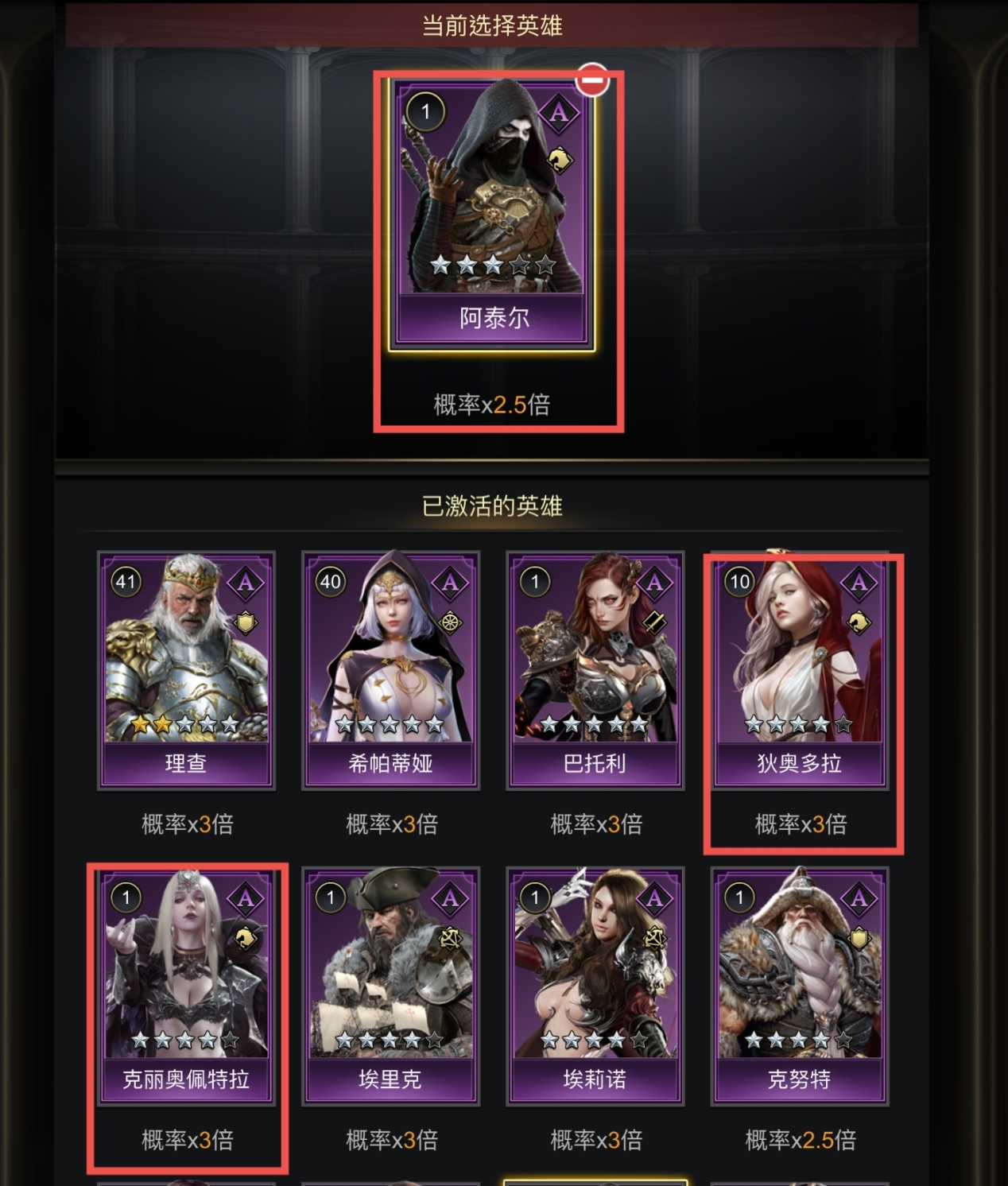 Siege heroes.Siege heroes include S Joan of Arc, A Hypatia, and A Matilda. Among them, Joan of Arc and Matilda are the most difficult to obtain among the S-rank heroes and A-rank heroes, non big spenders are suggested to use Hypatia. 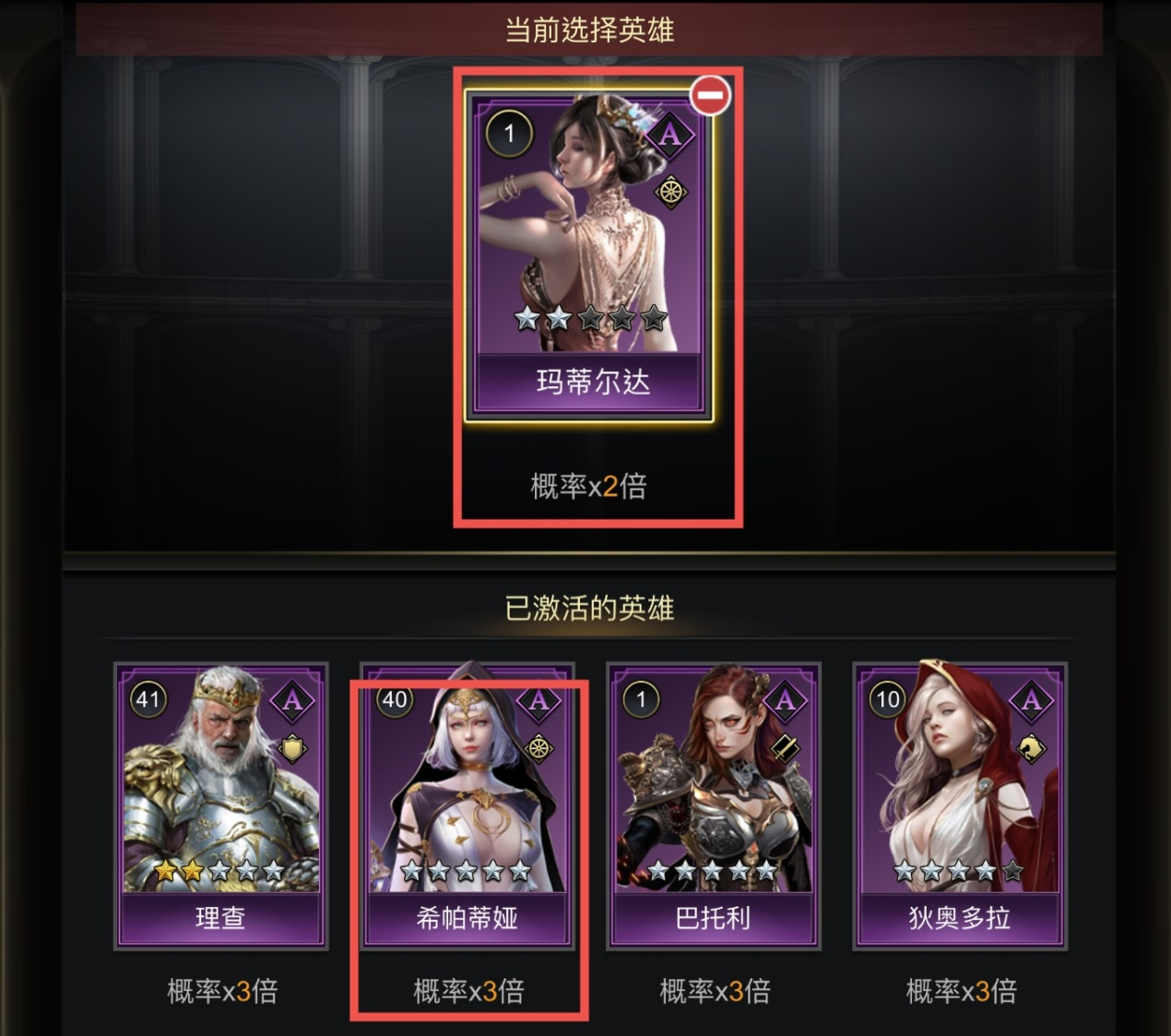 1.Guard+ArcherThe most common match, no matter in what event you can have a decent advantage. The normal Guard+Archer match includes Caesar+Alexander+Genghis Khan+Hypatia/Joan of Arc+Eleanor/Edward, and the free player's recommended match is Caesar+Alexander+Genghis Khan+Hypatia+Eleanor. Due to the difficulty of obtaining Caesar, there has also been an "extreme" Guard+Archer match, namely Richard + Alexander + Genghis Khan + Hypatia + Eleanor. The fragments used to enhance Caesar will be allocated to Alexander. The advantage of this match lies in the team. The archer's damage can be maximized in alliance rally. The disadvantage is that due to the weaker attributes of the Guards, it may be at a disadvantage in 1V1 battles. 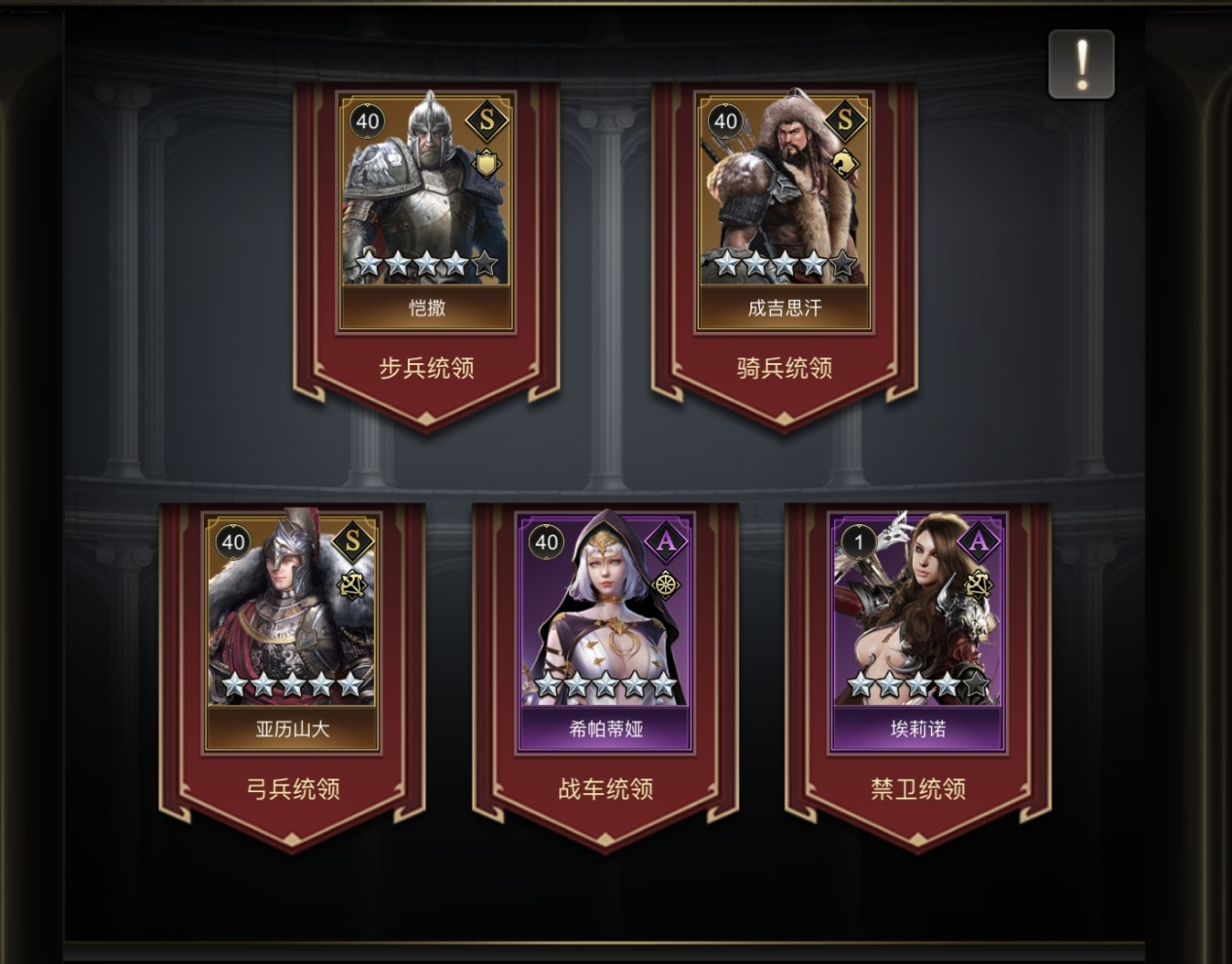 2.Double GuardsAlso known as the front match, the common collocation is Caesar + Alexander + Genghis Khan + Hypatia/Joan of Arc + Richard/Knut, and the free player's match is Caesar + Alexander + Genghis Khan + Hypatia + Richard. The advantage is that the loss of soldiers in individual battles is low, and the disadvantage is that they may be prioritized in rallies due to the high attributes of Guards. In some events, such as monster sieges, the damage deal will be lower than other players. 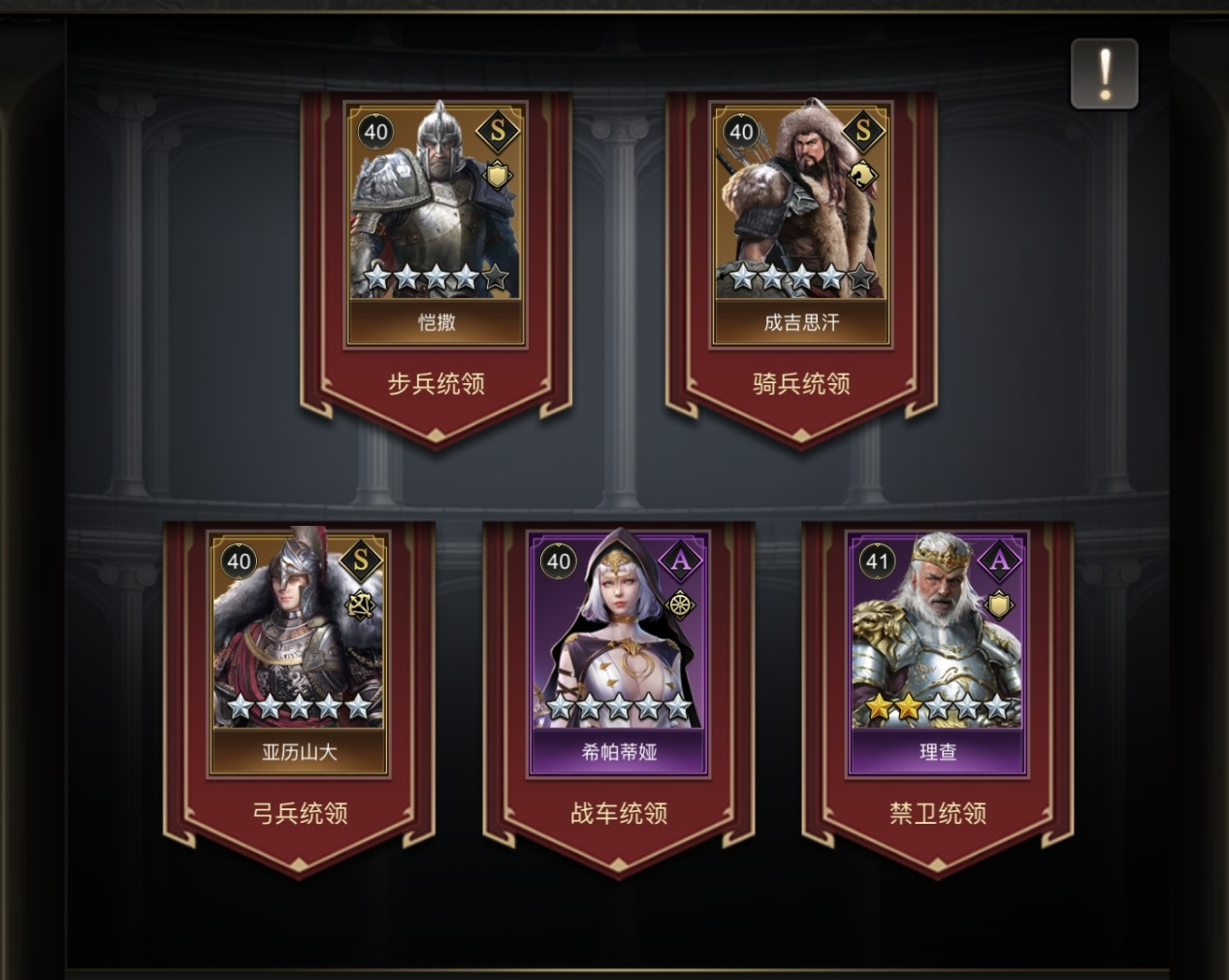 4. SiegeThe legendary match. The common match is Caesar + Alexander + Genghis Khan + Joan of Arc + Hypatia/Matilda. The match is rather interesting. No free player's match for it since it requires a lot. I have only seen it once. It is not recommended to play this way. 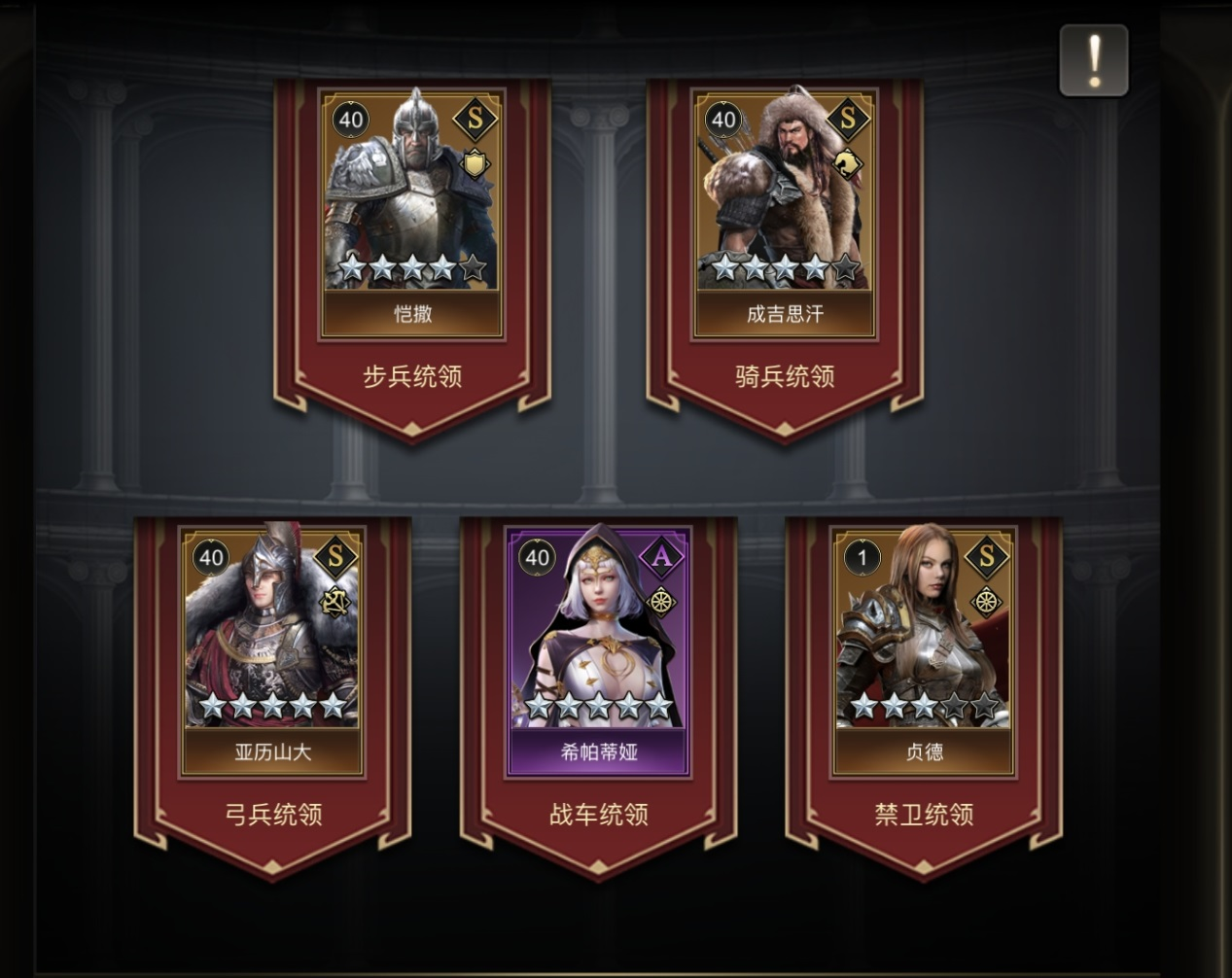 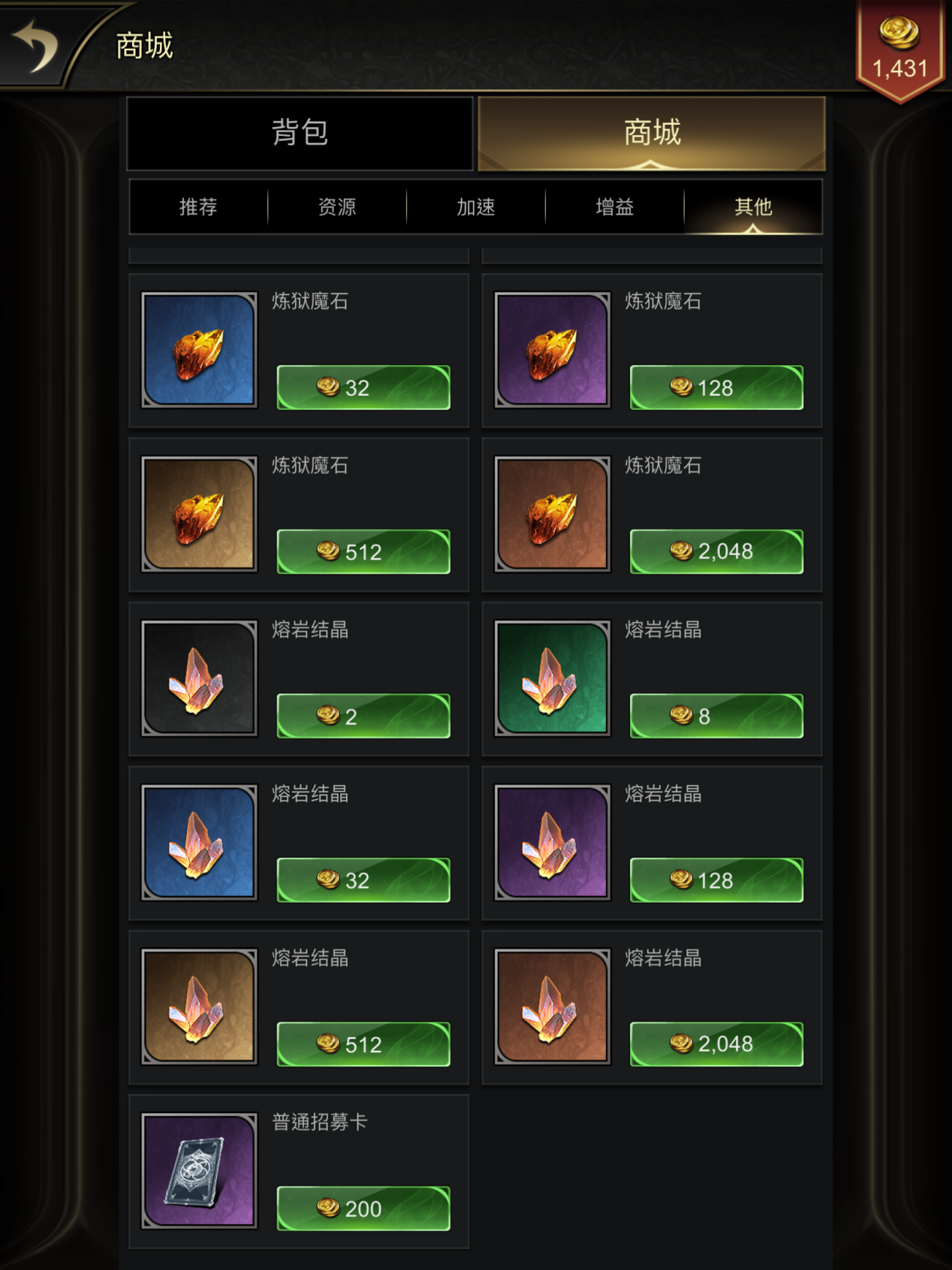 Advanced Recruitment CardLet’s focus on this. Its general methods include Life Time Bonus Card(recommended for long-term play, very cost-effective), the devil befall (don’t forget to join), Gold top up event (free players can ignore it), and the gold Lucky draw (not worthwhile) ), updated events (Halloween events, kingdom ceremony, etc.). Here are two things that everyone easily overlooks.Daily Sign in.Many players around me often forget it, the sign-in link is https://coe.leme.hk.cn. 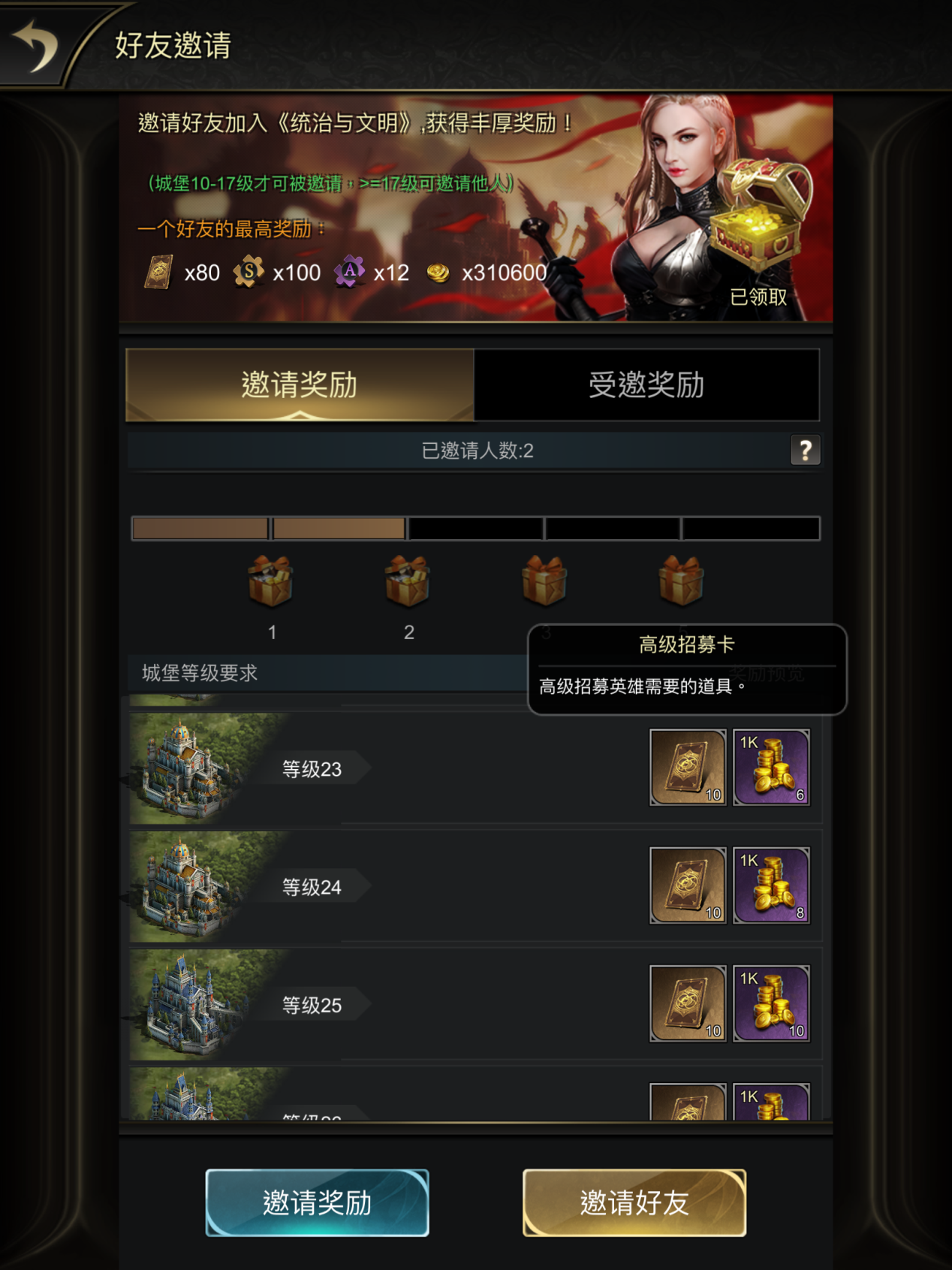 Polar desert camp selectionThe high-ranking faction will receive advanced recruitment card. The specific choice is the storm camp below 26 castle and the phantom camp for 26 and above. After refreshing, it is recommended to choose as soon as possible, it is easy to be full. 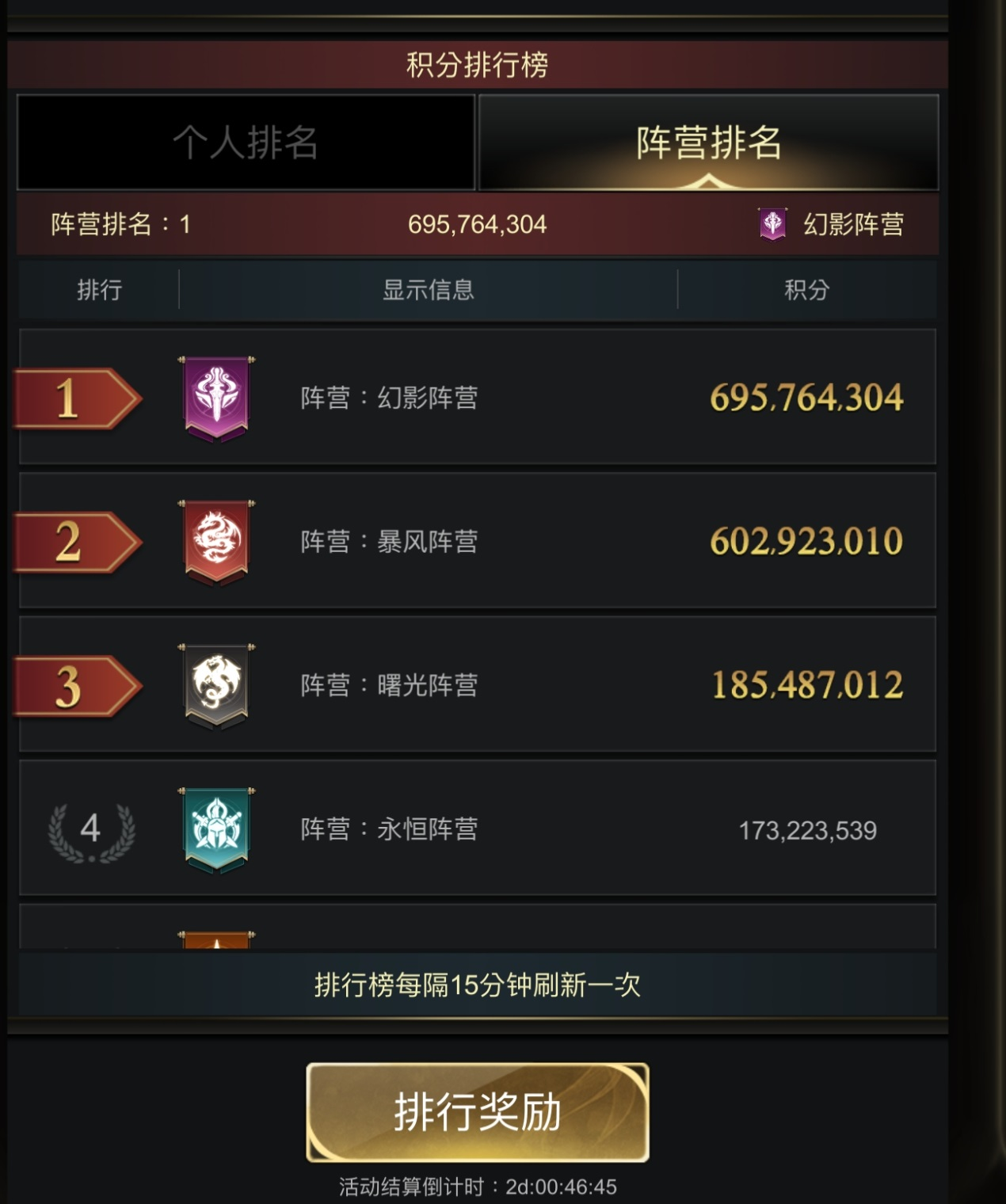 Hero Exp.Hero experience is related to hero level, level 40 unlocks the hero's ultimate skill. It is recommended to first upgrade each main hero to a multiple of 10 (that is, level 20 or 30), and then concentrate the experience to a certain main hero to reach level 40 according to the match. The common ways to obtain hero experience are as follows.
Plundering of polar desert campsThe Polar Desert System is the only place that can automatically produce hero experience. Its output is positively related to the level of the hero hall and the garrison hero. The hero hall is a prerequisite building for upgrading a 30-level castle, so you can consider to upgrade it in advance. The experience camp in the polar desert can be plundered by players from other factions. It is recommended that you can collect it once half a day.It takes hero stamina to plunder the camps of other faction players. Stamina can be restored automatically to 240 at most per day, and the final task of the daily goal needs to consume 260 points. This can be supplemented by using the stamina in the backpack. If the stamina in the backpack is not enough, you can appropriately abandon the final goal of the day and allocate that day's stamina to other days. 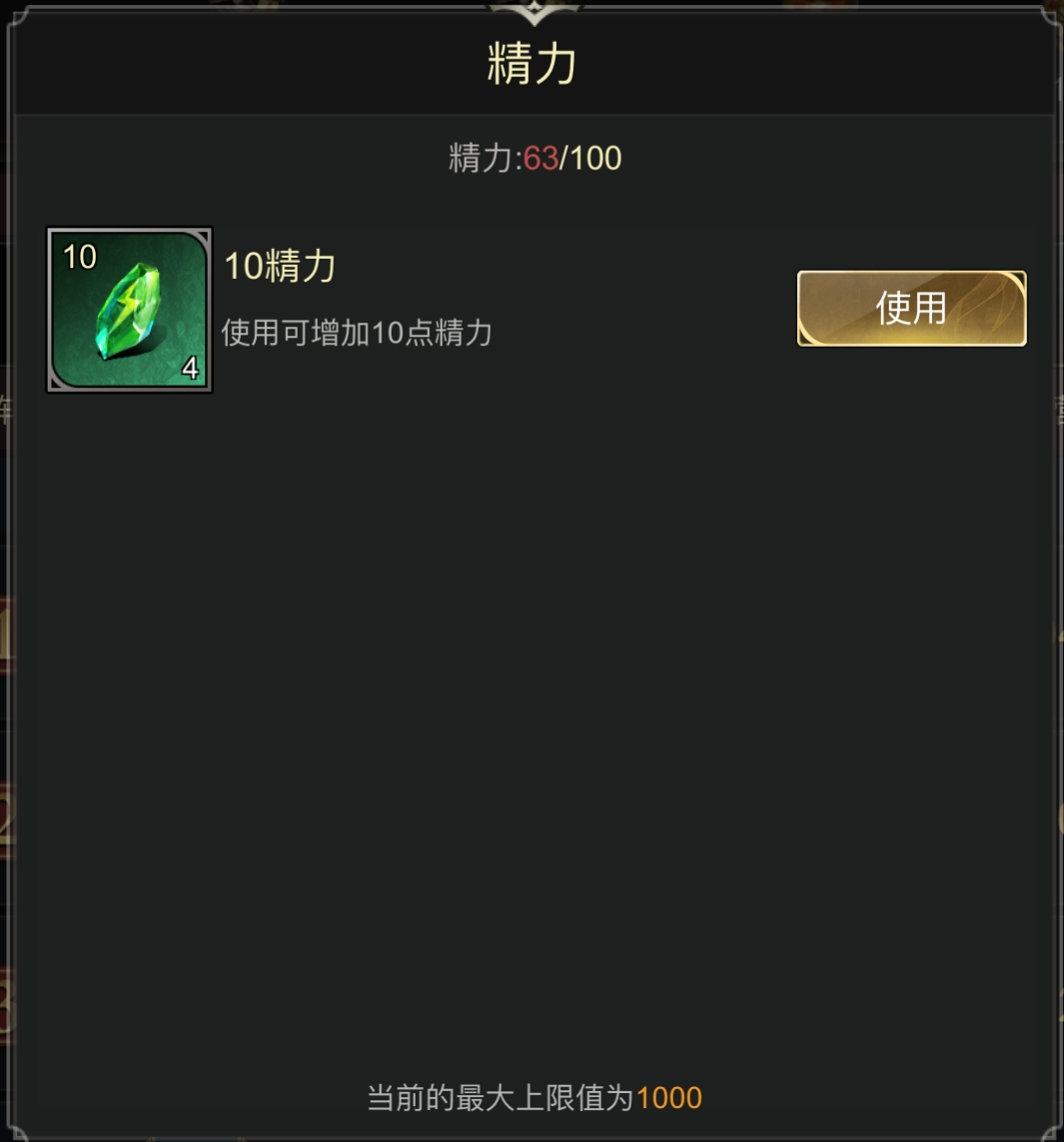 Decomposition of hero fragmentsAccording to my above explanation, all B-level heroes, some A-level heroes such as Eric, Cleopatra, etc. Their fragments can provide a certain amount of hero experience 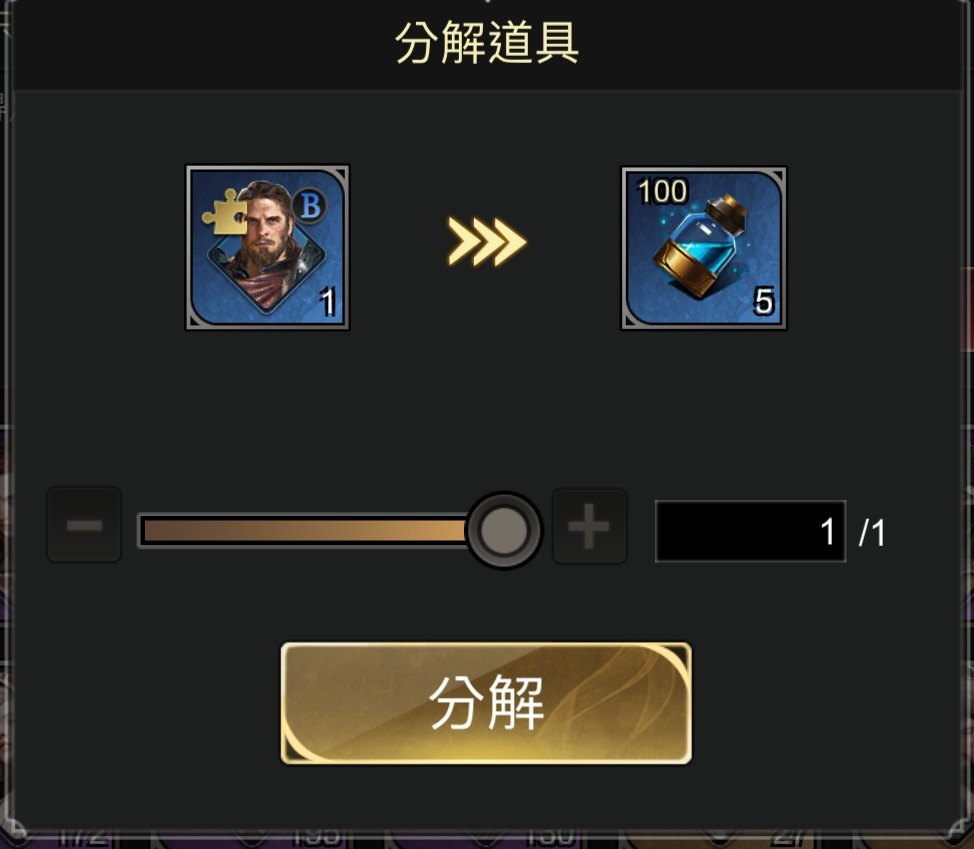 Consumption Events.Another main method is the fixed stamina consumption event every week. The suggestion here is to keep the stamina of the previous day, that is, do not consume the stamina recovered at night after waking up on Tuesday morning, save it until 8 o'clock Beijing Time that day to cooperate with the consumption event.The above are some of my thoughts. I hope that new players can make fewer mistakes and grow quickly after watching it!
Previous：[Player sharing] Alliance Expedition_K219_Simon Next：[Player sharing] Hero Enhancing_K219_Simon
Facebook YouTube