As the name suggests, the alliance expedition event is based on the entire alliance, and is matched against a certain alliance of other kingdoms (servers).In my kingdom, the Alliance Expedition event first appeared in the gold event week after the first Throne Fight, its frequency of occurrence is the same as the gold event, once every two weeks. Click on the Alliance Expedition Event interface to see that the entire event is divided into Preparation, Match and Expedition 3 stages.

Therefore, this strategy will introduce and share some of the differentexperience and techniques in these 3 stages. Because the alliance expedition and the gold event’s phase 5 killing event take place at the same time. So these related parts will also be mentioned accordingly.

Preparation.Preparation stage starts in the phrase 4 of Gold event, 10 am server time. Because players in COE are from all over the world, so most alliance will use the server time to manage the events. You can check the server time in the interface below. 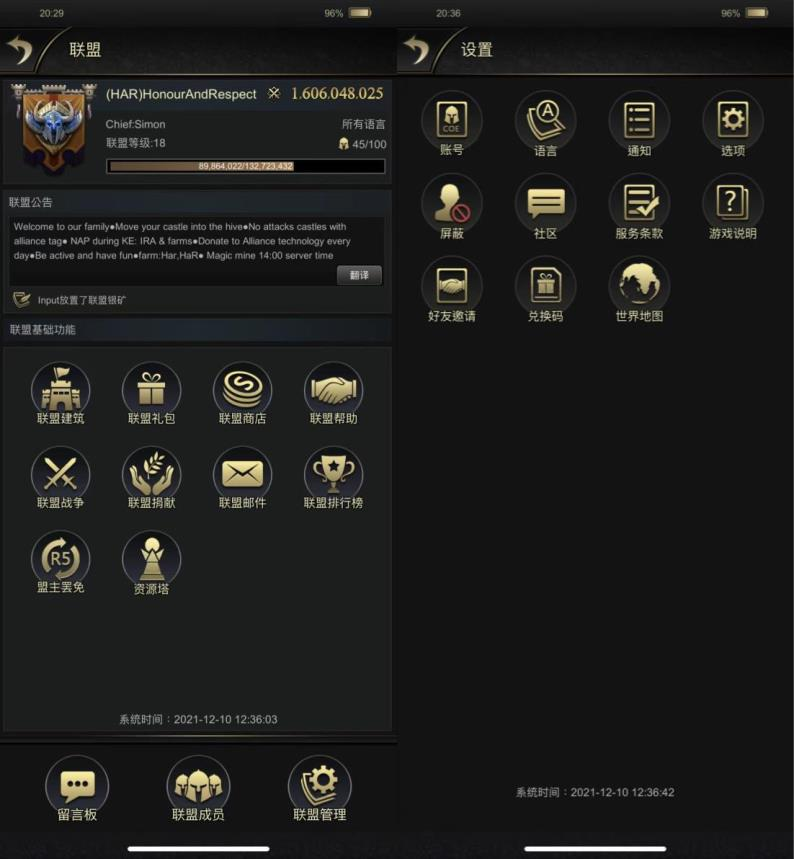 Back to the expedition, the preparation will last 24hrs, in the meantime, all alliance members can only collect magic energy through alliance donation to activate the function of choosing your opponent, and different expedition buffs. The Alliance donations are divided into X1,X5 and X20 three gears. X1 gets 100 magic energy, and the energy gained by the other two gears increases correspondingly with the multiple. During preparation stage alliance members can quit at any time, however the magic energy brought by the member will be deducted. The leader can appoint a expedition assistant to chooses the opponent alliance together in match stage. 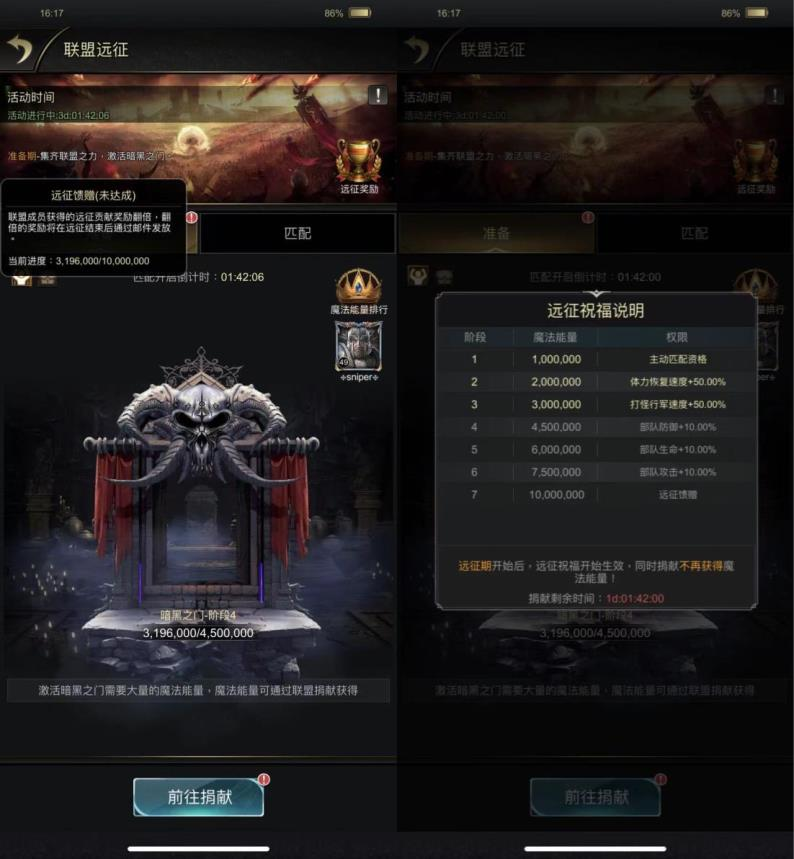 The change of alliance members can effectively arrange the cooperation or distribution of different alliance players in the kingdom. For those who want to participate in expedition,Players can prepare together, and players who do not want to participate in the event can also choose to quit the alliance to save their power. This part will be explained in detail during the expedition.

Match.The match stage starts at 10 am on Friday, is 24 hours in length, and ends at 10 am on Saturday. Alliance members remain in the match period. Alliance members can still collect magic energy through donating, however alliance members can no longer quit or join another alliance. During the entire match period, if the alliance magic energy exceeds one million, you can take the initiative to choose other alliances as opponents. I will make a guess here about the matching mechanism. Alliances in close kingdoms and similar power with more than one million magic energy enter a "matching pool" at the same time. Quicker alliances select opponents, while alliances that are selected automatically lose the opportunity for proactive matching. Therefore, the matching must be accurate and fast.Because other alliances’ situations such as the number of players and the combat power of each player are still visible. During the preparation period, switching heroes and equips to control combat power have a certain deceptive effect. And once matched successfully, the total combat power of the alliance will not be updated anymore. So in the preparation period, you can appoint low-power heroes and switch lower quality equips to reduce the overall level of combat power. When the match is successful, replace the hero and equips again. Some big spenders will even reduce their power through dismissing their own troops. 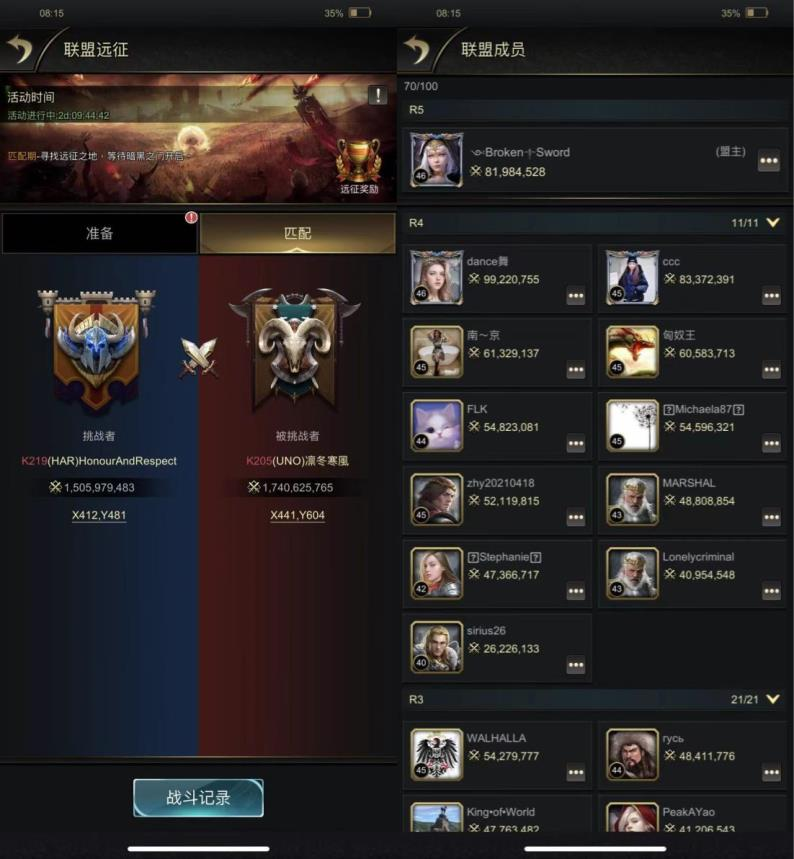 Once the match is successful, you can know the coordinates of opponent’s Alliance Fortress. The coordinates still exists even when the Alliance Fortress is demolished. Alliance members need to do several things at this stage.Keep donating, try you best to get the biggest alliance expedition buff.Appoint the strongest hero back and switch the battle equips.

Use shield in time.If you have a plan to make a surprise attack, you can use random teleport in advance to hide yourself.It should be noted that Friday is also the start of the 5th phase of the gold event. Players can still attack other players in the same kingdom before the match.

Expedition.The expedition stage starts at 10 am on Saturday, lasts 48 hours, and ends at 10 am on Monday next week. At the beginning of the expedition, according to the magic energy collected in the first two stages, the alliance can get all the buffs that meet the requirements. Throughout the expedition, each member can earn points by gathering resources, alliance donation, consuming stamina, and killing opponents’ soldiers. According to the final points, up to 8 stages of rewards can be obtained. Once the points of a certain stage are reached, you can immediately get the Stage rewards. 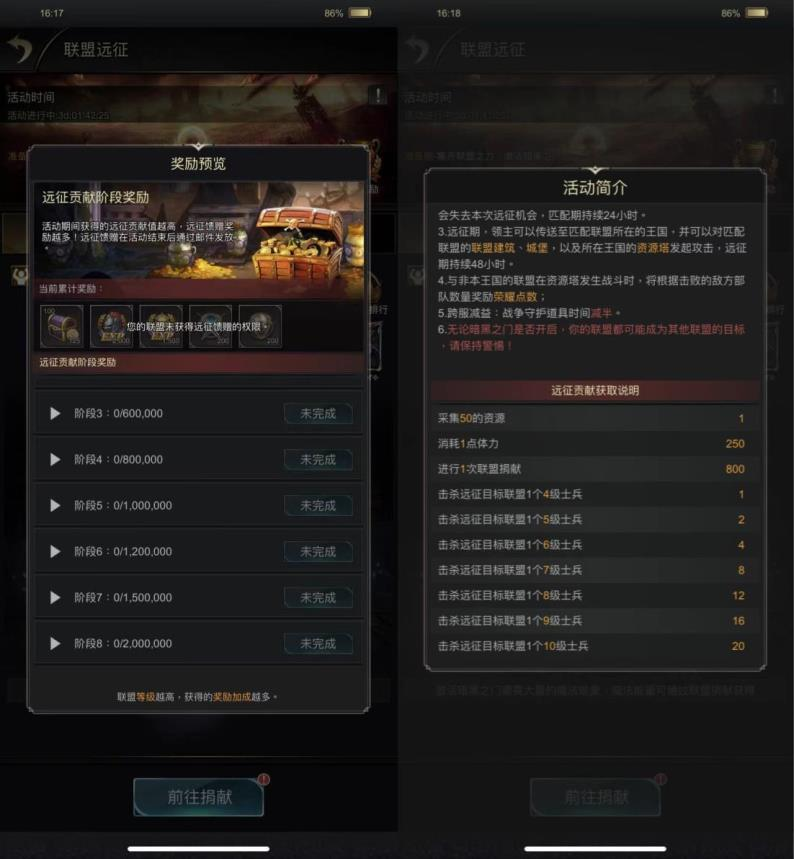 The competition for resource towers during the alliance expedition is a big melee.Some players can find out that kill event, resource tower fight and expedition stage are at the same time. And all 3 events require killing soldiers, killing points can be earned for the whole 3 events. However, it is worth noting that the soldiers killed by the alliance expedition must be from the target alliance and must be at least T4 to be counted in the points.There are several points to note during the expedition.1.Gathering, monsters, camps an alliance donation can also get points, so you don’t necessarily need to migrate to matched kingdom where the alliance is located. Once moved to another kingdom, the duration of your shield is halved.2.Cannot attack any resource field. So for players who don’t want to participate in the alliance expedition, they can just quit the alliance and use shield.3.Can attack the magic mine activated by the matched alliance.4.There will be no additional ranking rewards at the end of the event.

Summarize.Alliance expedition can be said to be an event that takes into account the overall consistency of the alliance and individual differences. At the same time because of different events at the same time, the alliance expedition is not only a confrontation between two alliances, but also another kind of melee between different kingdoms. I’m Simon, looking forward to sharing with you next time.