Aslan, the guardian with different personalities, can become a great help for the lord to conquer the world, so how to cultivate and use the lion becomes very important.Let's first introduce the attributes and functions of different lions.1. Gentle.The lion in white has gathering bonuses, which is suitable for the lord to use in the daily development to gather resources, because it can greatly shorten the gathering time. The more resources are the resource field, the longer the gathering time and more obvious the buff. Therefore, it is recommended to send the march with white lion to alliance mine. 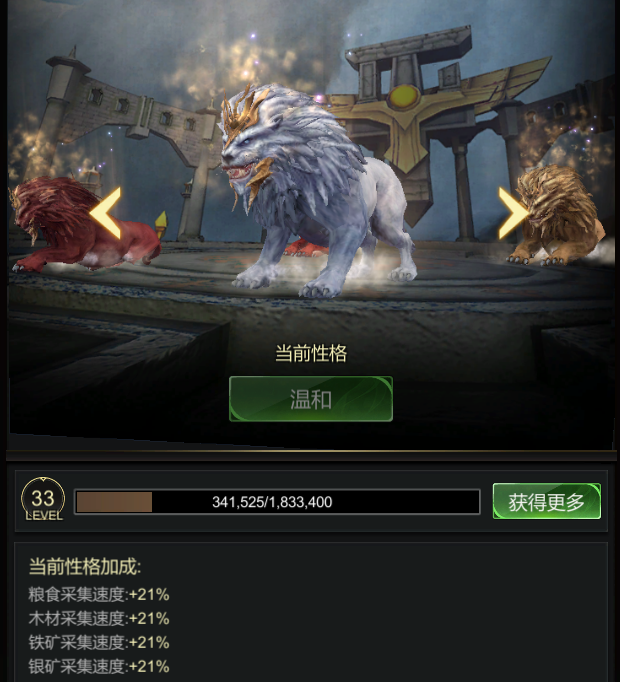 1.Energetic LionIt is the first choice for monsters and camps, since the energetic lion provides buffs for it . Note: The attributes here are for monsters only. Some monsters in events are not included, such as: kingdom monster. The dragon in the middle, the demon king in the demon king, the level challenge in the treasure trial.

2.Fierce LionIt is necessary to use fierce lion when garrisoning and defending. When the enemy or monsters attack us or our allies, the fierce lion can provide us with a lot of defensive attribute bonuses. 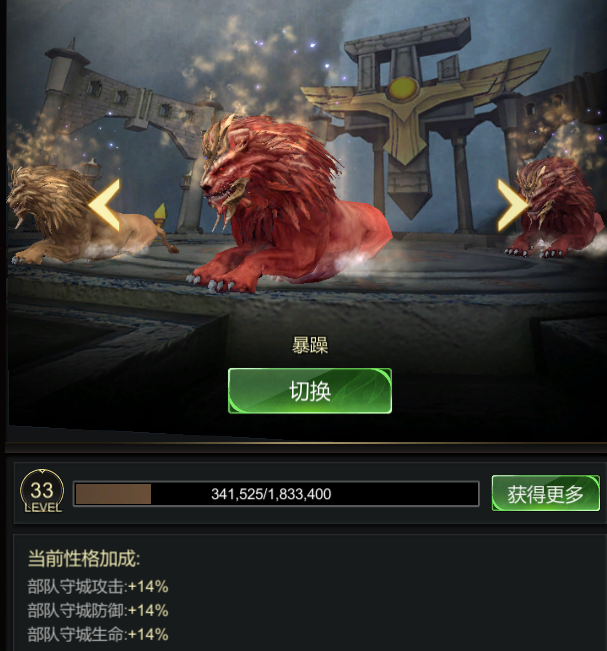 3.Cruel LionThe cruel lion is suitable for us to attack the enemy's castle and for some events. It can provide attributes for our troops (the following events require the use of the cruel lion for the team's bonus: Devil’s Befall, treasure trial) 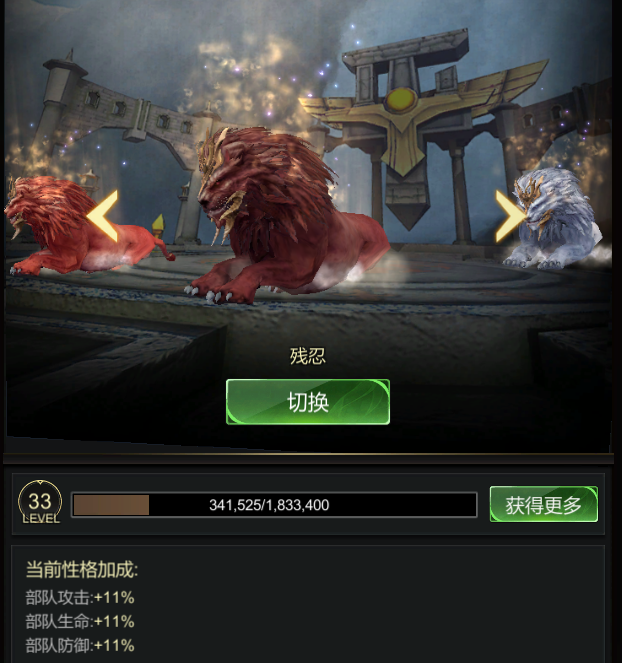 After introducing the lion's attributes and applicable occasions, the following mainly introduces lion's skills:The skills of lions are divided into two categories, one is combat skills, mainly used when the lord is in battle, troop march with a lion will bring a lot of combat attributes, the other is development skill, which are mainly used when the lord is developing, including Attribute bonuses for gathering and slaying monsters and camps, a lion can bring up to 6 combat skills and 6 development skills. 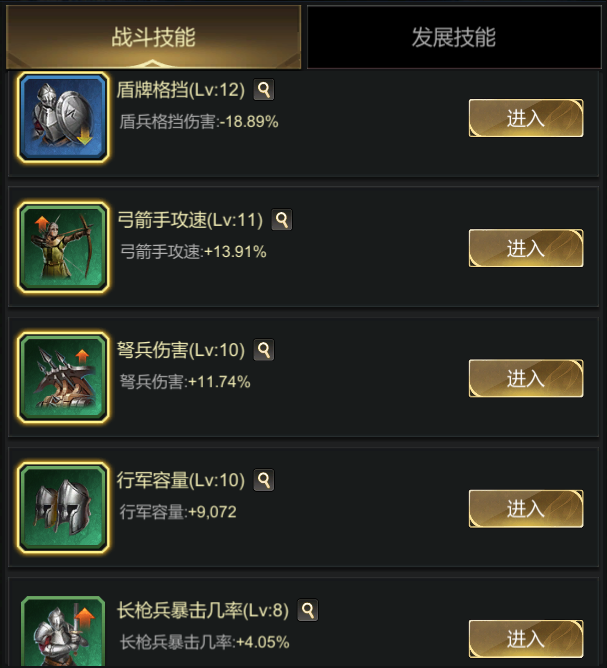 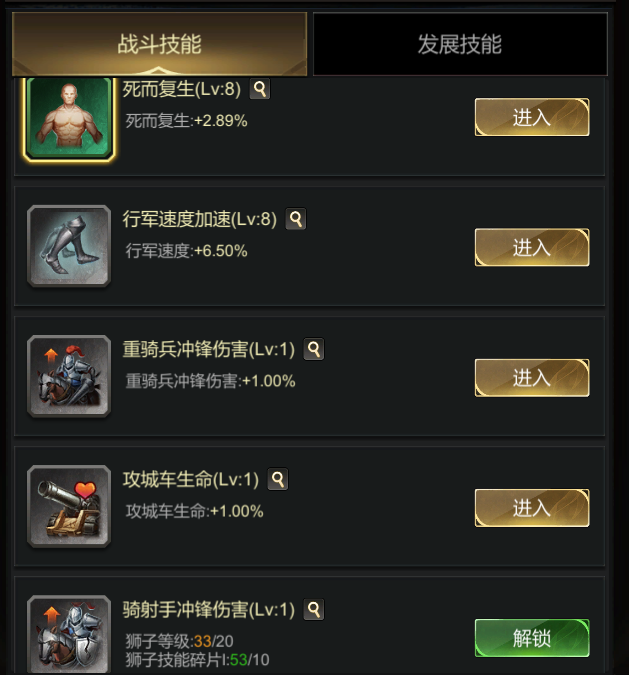 1. Combat skillsThere are a total of 11 combat skills, which are roughly divided into 5 categories: infantry, cavalry, archer, siege and general bonus. The specific attribute bonuses can be seen in the game. Here are a few essential skills and the combination of some selected skills.For players, Block Damage, March Capacity, and Revive are essential, especially Block Damage, these skills have the priority to be upgraded. As we all know, in the game, The front row is the most important, so the skill Block Damage must be fully loaded. In the later stage, under the same combat power, the skill level and quality of Block Damage can even determine the outcome of a battle. Then it goes without saying that how important March Capacity is. Once the March Capacity is increased, the combat power will be higher, and the more bonus we could get from Revive. Though it seems like the bonus is very little from the number on the skill Revive, it will be particularly important.Next, let’s talk about the remaining skills, which depends on the troops you play, the lineup of Guards and Archer, Guards and Cavalry, or Siege. Players need to choose the corresponding lion skills. There are two options for the last extra skill, the Crit Rate of the Spearman and the March Speed. I think it depends on the configuration of your troops and hero lineup.To sum up, there are six skill configurations of combat skills: Block Damage, March Capacity, and Revive. The other two depend on the lineup configuration, and the last one is selected from March Speed and Spearman Crit Rate. 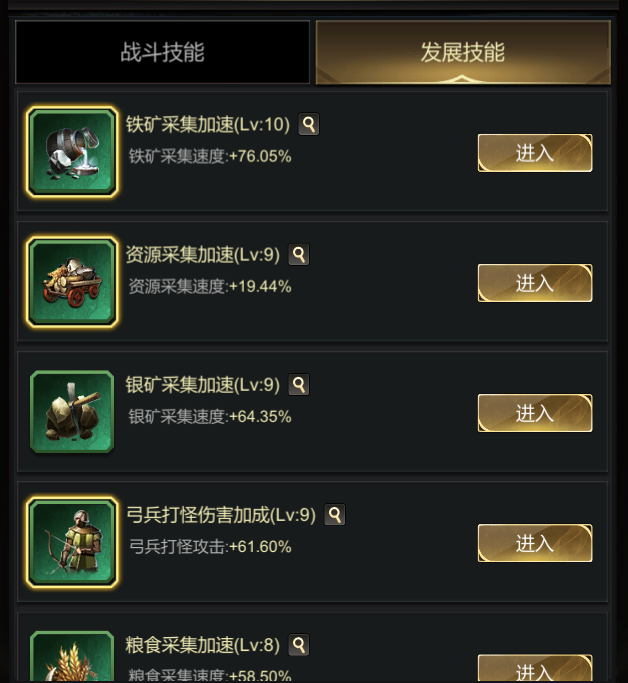 Development skills focus on monsters, camps and gathering. In the early development of the castle, the castle needs a lot of food and wood resources, so these two and the Troop Load are given priority to upgrade in the early stage, which can greatly improve the development efficiency in the early stage. After reaching C20, a lot of iron and silver are needed. At this time, according to your own resources and your own technology, you can reset the wood and food gather bonuses, and then upgrade the iron and silver gathering bonuses. In addition, Resource Gather Speed is also a must. The rest of the skills are mainly aimed at killing monsters. Speeding up the march of monsters can improve the efficiency of hunting monsters and shorten the time of hunting monsters. This depends on each person's requirements for monster hunting. Finally, I will introduce how to obtain lion experience, points and lion shards. Lion experience and points can be obtained for free in Lion Throne every day, mainly through monsters, camps, battles, and Vendor. In addition, garrison in the alliance events such as magic mines resource towers can also gain a lot of experience. If you want to quickly upgrade your lion, you need to actively participate in various events in the daily game. Lion shards are difficult to obtain in the game. The main way to obtain them is the ranking rewards of Gold Event, weekly and monthly sign-in, lucky draws.At the same time, we recommend some more cost-effective gift packages: Gold Monthly Card, you can get double check-in prizes for each month's sign-in event, and you can also get a lot of extra gold.

Aslan Spirit.Aslan Spirit has the same skill attributes as the current lion. It can only defend the castle. It is suitable for defending the castle in war. The activation is divided into 10,000 gold for 1 day and 20,000 gold for 3 days.